New publication: a critical review of the resilience engineering literature

mars 30, 2015
Dear readers, today I am happy to announce the publication of a paper that has been a work in progress for the last 15 months, a paper entitled On the rational of resilience in the domain of safety: A literature review, which will be included in the upcoming special issue on resilience engineering in the journal Reliability Engineering and System Safety.

During my time as a guest researcher at Griffith University in Australia I studied Foucauldian discourse analysis and archaeology together with my great friends and colleagues Roel van Winsen and Eder Henriqson (the three of us once shared an office at Lund University). When the special issue on resilience engineering was announced we decided to apply some of the techniques of discourse analysis in a critical review of the field. This is the analysis that we have now gotten published.

So, what did we do? Well, to summarise, we gathered our data based on the systematic literature review-methodology. We identified the journals in which the scholars of resilience engineering typically publish their results, and then conducted broader searches in those journals. We also searched beyond those journals and then with more specific searches. We ended up with 71 papers to study and after an initial exclusion procedure we had 52 papers to include as data in our study.

The next step was, based on our findings from studying the papers based on the three guiding questions, to make an analysis of what our findings mean in terms of the heading for resilience studies and what consequences this heading might have for how resilience is advocated and enhanced. In our analysis we highlight the following three ethical questions that we believe the safety science will need to tackle in the future:


I really hope that this paper will offer interesting reflections to those initiated in studying resilience, as researchers or students. I also hope that we can be part of a fruitful debate in which not only this critical review of resilience, but also this critical review of cognitive constructs or this critical study of the notion of safety culture can form a critical language for academic self-reflection. Ten years since the resilience engineering perspective took off I think is a good point for such a discussion.

Another group of master students have begun their journey 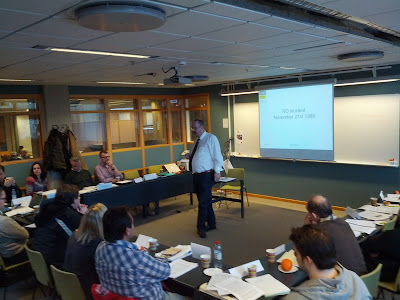 I have an awesome job! This week I am hosting the first learning laboratory for our new students in our Master Program in Human Factors & Systems Safety . The new students represent industries such as health service delivery, oil and gas, aviation, air traffic control, shipping, railway, and fire fighting. The diversity and level of student experience is what makes this program so fantastic to work with - I learn so much from these students! Together with three colleagues who are former students in the program I am this week tossing theoretical notions from the safety sciences out in the room for the students to play with, mix with reality and toss back. I am really looking forward to spending two years following these students. A journey for us all I think. Below four pictures from the class room. The first two showing Hans Houtman introducing a case study this Monday morning. The second two show the result of yesterday's results of the students' understanding about
Läs mer